The Valhalla Cross Country Program was awarded the Pursuing Victory with Honor Award from the San Diego CIF office. They were nominated and selected from among over 700 teams from this past fall season. Only one team from the entire county was honored for the fall 2018 season and our Cross Country program was this fall’s winner. The program won based upon their sportsmanship both on and off the course.

They exhibited, as a team, the six pillars of character, Trustworthiness, Respect, Responsibility, Fairness, Caring, and Citizenship. Congrats to Coach Hughes, Coach DelaCruz and to the late Coach Carter for all that you have done to lead and mold these athletes the right way. As a reward for their efforts, the program was awarded with lunch from the CIF Office and Epic Wings n Things. They also received a rare pin that can be placed on their lettermen’s jacket. Thanks to CIF Commissioner Jerry Schniepp, CIF Office staff Vanessa Myers, District Superintendent Tim Glover, and Conference President Brian Wilbur for joining us for this recognition. 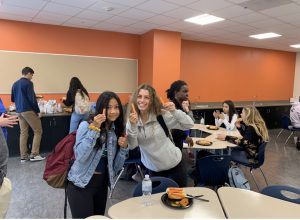